Shanghai has long been the gateway to China. Located on the Yangtze River delta, it is known as the “City above the sea, the Paris of the East.” The city is the largest economic and trade center in China, and one of the country’s biggest cultural centers.

Shanghai is a relatively young city, despite the cultures found in other cities in China like Beijing and Xi’an. It boasts a unique fusion of Eastern and Western cultures.

As one of China’s largest and richest city, Shanghai is a mega-metropolis, which oozes an atmosphere on par with New York and Paris in terms of modernity. It is a bustling international hub with something for everyone.

Although Shanghai doesn’t have a long history, many events in China’s modern history happened here. In fact, in Shanghai, old and new buildings stand side by side in contrast. The Shanghai Museum has many exhibitions and there are also charming colonial parts of the city that include Xintiandi and Nanjing East Road. 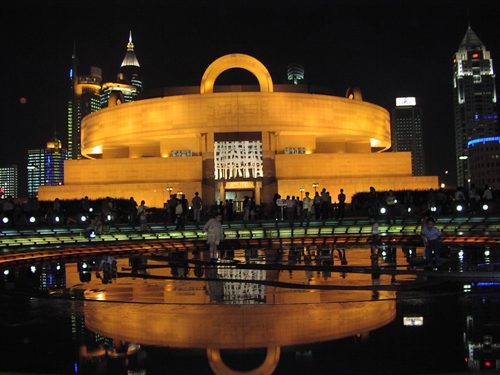 Did you know that Shanghai is second in the world for Art-Deco style buildings? If you enjoy architecture, take a walk along the Bund. Even Prada recently got involved with a renovation project of an old visa house in Shanghai. It is now open to visitors if you can manage to book your spot well in advance. 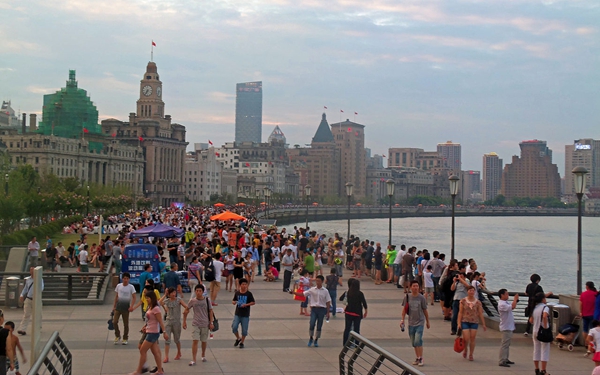 When taking a walk around the City, start around Huaihai Road, which is also good for shopping, and wander into the roads nearby. There are lots of cafes, too, if you want to make a stop and do some people watching.

When is the best time to Visit Shanghai?

The best times to visit Shanghai are March to May (spring) and October to November (autumn). This is when the temperature is the most comfortable. Please note that there are many public holidays and festivals during spring, so autumn may be a better choice if looking to avoid crowds.

Summer in China runs from late June to late September, and is peak tourism season. Note that it becomes very hot and humid during this time of the year, with frequent downpours of rain. Winter gets incredibly cold, which can make city exploration less pleasant.

Do your best to avoid local holidays, like Labor Day (May 1-5) as the city’s main tourist sites are overrun with local tourism, and hotel rates will skyrocket. Shanghai is a business-centric city, so keep in mind that hotel rates usually drop over weekends. The city has a huge range of fancy hotels, but to save money, consider booking a hostel instead of a 2 to 3-star hotel, as hostel staff are more likely to speak English. Most people speak English well enough, so getting directions or information should generally not be a problem.

Exploring on Your Own

Whether you are in Shanghai for architecture, cuisine, history, shopping or entertainment, there is something in the city for every interest. There are things to do for every budget and it’s not difficult for you to explore on your own. You can use the city metro system to get around or, if you choose, you may consider taking a guided tour for one day, just to get a better understanding of the city. Then, you can walk or tour by bike, if you wish.

The suggested places listed below are all free – or low-cost. They are a good way to get started on your trip to China—especially if you are on a budget, but still want to have a good experience.

The Shanghai Museum, situated alongside People’s Park and People’s Square, boasts more than 120,000 pieces of ancient Chinese art and relics. It has exhibitions ranging from beautiful clothing from the Chinese ethnic minorities, to a Jade collection, to antique furniture and calligraphy. (www.shanghaimuseum.net)

MoCA is a good place to visit as well as the Power Station of Art. You should check out the times they are open and any exhibits before you go.

Housed in the former China Pavilion from the 2019 Shanghai Expo, the building is a sight to behold. Resembling an upside-down pyramid, the bright red structure evokes an ancient Chinese crown. Use the museum visit as a time to check out the old Expo grounds, which have fallen into a rusted state while waiting to be redeveloped. (www.artmuseumonline.org/eng)

M50 is the main area for galleries in Shanghai, located in the north Jing’an district. Lots of local and foreign artists have their galleries here and you can easily spend an entire day there. (https://en.wikipedia.org/wiki/50_Moganshan_Road)

Shanghai’s other creative space, Red Town is also filled with galleries and studios, often playing host to many art openings. During spring and summer, the central courtyard is overrun with children, but laying down on the hill with a book or a picnic is something worthwhile. Red Town has a couple of cafes worth a look and some fun outdoor installations to see.

Located in the former French Concession, it has a wide open green space where you can lay down in the grass and enjoy the weather. It is an awesome location to check out some Tai Chi and to people watch. (https://en.wikipedia.org/wiki/Fuxing_Park)

Century Park is Shanghai’s largest park. You can reach it via subway (line 2, less than 20 minutes from People’s square) out in Pudong. Great for running, hanging out, picnics, and any other park activity you can think of! Century Park also has been the hosting site for the Midi music festival on many occasions. (https://en.wikipedia.org/wiki/Century_Park_(Shanghai))

The Former French Concession is 8 kilometers and is impossible to hit all in one day. You can take a stroll, bike ride or visit cafés, botiques, alleyways and embassies. If you are an architecture-lover, the neighborhoods around the former French Concession are heaven for photographers. (https://en.wikipedia.org/wiki/Shanghai_French_Concession)

Chinese cuisine can be very diverse and you can find flavors all over China – Sichuan spicy, Hunan savory, and even Cantonese. Of the best food places to visit in Shanghai, the famous DinTaiFung dumplings chain has several stores in the city and there are also some cool vegetarian – Buddhist style—restaurants as well. Try the one next to Jing’an Temple, for example – it is really nice and has very fair prices.

Great shopping ranks among the top things to do in Shanghai. If you want a dress or suit made, the South Bend Fabric Market is for you – make sure to bargain! Other great things to buy are silk clothing, scarves or quilts. Pearls and cashmere are also very affordable so make sure to check out the markets and ask for a good price.

The historic building was previously a slaughterhouse, but underwent renovations in the last few years. Ownership loosely calls it a “creative hub,” but it is an urban renewal project filled with shops and restaurants that are worth a visit and walk through in the historic Hongkou district. (https://en.wikipedia.org/wiki/1933_Old_Millfun)

The Jewish Refugee Museum shares the incredible story of about 20,000 European Jews that managed to escape to Shanghai just before World War II started. A walking tour of the Jewish Quarter can be found here.

Beneath National Anthem Square in the Jewish Quarter, the National Anthem Gallery is dedicated entirely to “the March of the Volunteers.” It is filled with nationalistic fervor (written in both Chinese and English), and does feature a small section on American singer and Communist sympathizer Paul Robeson and a giant centrally located mural.

Accessed via Line 7, you can walk south from the subway station along Dong’An Lu. You’ll see red cranes in the distance; that’s the Xuhui Riverside Public Open Space, and just beyond it is the Huangpu River. At the West Bund, you’ll find a rock climbing wall, skate park, basketball courts, and more. Hangout between the skate park and the water and watch the seemingly endless stream of large freighters and cargo ships drift by. (http://en.xuhui.gov.cn/Riverside.aspx) The Bund provides some beautiful views and there are several bars for those looking for things to do in Shanghai at night. Local bars can be found on Donghu road or Wuding Road.

At the 400-year-old Yu Gardens, you can experience the traditional side of the city. (https://en.wikipedia.org/wiki/Yu_Garden)

Located just outside of Yu Garden, Huxinting Tea House is the place to get away from crowds in the Old City. Tea is expensive here – you are paying for the ambiance and location – but options are myriad. Tea choices include Oolong, jasmine, and longjing green tea from nearby Hangzhou. Tea orders come with snacks that include boiled quail eggs, marinated tofu and sweets.

Shanghai’s largest and most active temple, Longhua Temple boasts five halls and two towers with a five-ton, two-meter-high copper bell, which is struck on New Year’s Eve. The centerpiece is a seven-story, eight-sided pagoda that is not open to visitors, but makes a great photo.

The Old City is a great neighborhood for exploring and getting lost. The Old City was once the central core of Shanghai, surrounded by a fortified wall built to keep Japanese pirates out. Today, just a 50-foot section of the old wall remains.

Puxi, the west side of Shanghai, has the city’s historic buildings, and Pudong, to the east has skyscrapers. These are concentrated in the Lujiazui neighborhood, just across from the Bund. Jin Mao Tower stands 88 floors high, a post-modern spin on a classic 13-tier Buddhist pagoda design. Zoom to the tower’s 88th floor observation deck in 45 seconds and take in the 360-degree view or skip the line and settle into a window seat at the Grand Hyatt’s 87th floor Cloud 9 bar. The Shanghai World Financial Center is often called the “Bottle Opener.” It has three observation decks, the highest of which is on the 100th floor. The view from the top is thrilling, and on a cloudy day you will feel as if you are adrift in the clouds.

Built in 1994, when most of Pudong was still farmland, the structure is lit up by neon lights when night falls. Each of the towers three spheres, which are meant to represent pearls, has its own observation deck, and a museum in the base recalls Shanghai’s pre-1949 history. https://en.wikipedia.org/wiki/Oriental_Pearl_Tower

The Huangpu River divides Shanghai into east and west sides. The riverboat tour provides an immersion into the history of Shanghai. Recommended is the 40-minute tour that leaves from the base of Oriental Pearl Tower.

Located in the Xujiahui neighborhood, this Neo-Gothic Roman Catholic cathedral opened in 1910. It was destroyed during the City’s cultural revolution, and was restored in the 1980s and is now the headquarters of the Roman Catholic Diocese of Shanghai.

Whether you are in Shanghai for agriculture, cuisine, history, shopping or entertainment, this is a town that’s tailored just for you.